If you have experienced visiting Buddhist temples in Thailand, you probably have seen there are several different activities people do there. People do not go there just to pray, give offerings, or meditate, but also participate in a purification rituals or as in Thai called kaan-sadɔ̀-khrɔ́.

Originally, the ancient Thai people had a belief in supernatural, holy spirits, ghosts, etc. regardless of religions. Since we believe in something we do not see, the purification ritual has become a part of our culture. In this article, I write about three purification rituals that can be commonly seen in Thai temples. 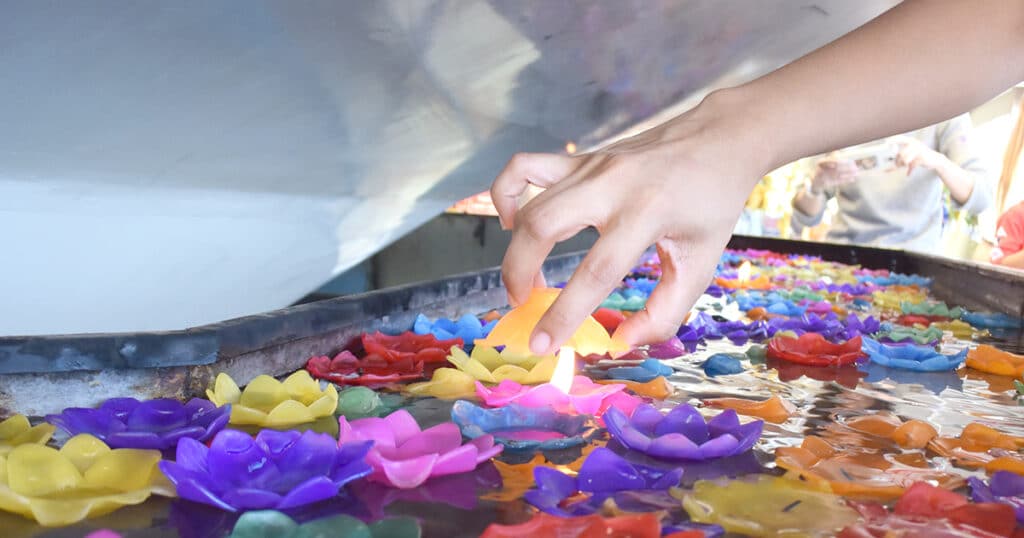 Each day of the week has its own color according to Thai belief. This idea is influenced by Hindu culture in which there are deities who protect each star including the Sun, the Moon, Mars, Mercury, Jupiter, Venus, and Saturn. Each deity’s body has his own color. The days of the week in Thai are named after these stars, therefore the deity’s color represents each day.

Some Buddhists believe that floating a flower candle based on their birthday’s color will give them a prosperous life and at the same time the light on the candle will bring them a bright life. While some people believe that to float the candle means to float all bad lucks away from their lives.

Since every temple needs to maintain religion as well as keep running all the religious activities which are beneficial for people in the community, money does matter. The profits from selling candles can be another way to generate income.

2. Laying Down in a Coffin

I personally have seen this ritual in one temple several years ago, but never dared to take a photo due to privacy issues. This ritual is more popular in the north of Thailand but still you can see it in other parts of the country.

This ritual is commonly done by a person laying down in a coffin with hands facing one another just like a ‘wâay’ gesture. Their heads should be in the west direction. Their body is covered with white cloth just like a dead body. Monks touch the edge of the cloth or in some places they touch the rope which is connected to the cloth while they say a certain prayer. This prayer is the same one the monks pray in a real funeral before the cremation.

Meaning of the Prayer

This prayer is entitled ‘baŋ-sùkun-taay’. The word ‘baŋ-sùkun’ comes from Pali language pronounced as ‘paŋ-sùkùla’ which means ‘a dusty cloth’, and the word ‘taay’ means ‘dead’. This refers to the cloth that is used to cover the dead body.

The prayer is chanted in Pali language and the meaning is in English version from my understanding as below:

After monks finish chanting this prayer, the people in the coffins then change their positions by switching their heads to the east direction. Then the monks chant another prayer called ‘baŋ-sùkun-pen’. The word ‘pen’ means ‘alive.’ The meaning is as below:

Our bodies, not so long,
will have to fall down to the earth.
When the souls leave the bodies,
the bodies become like a log, no use can be found.

Once the monks complete ‘baŋ-sùkun-pen’ prayer, the ritual is then done.

This ritual is popular among sick people but healthy people can also practice it. They believe laying in the coffin and listen to baŋ-sùkun-taay prayer as if they are dead. Then switching the position and listen to baŋ-sùkun-pen prayer as if they are born again with a new bright life without any sickness or bad luck. Some also believe that being reborn again, they will live longer since they have just started their new lives after the ritual.

From my research, the participants do not need to pay anything to do this ritual, just like many other purification rituals. However, people still love to donate some amount of money to the temple, while some people who are afraid to lay down in the coffins, prefer to donate money to the temple to buy new coffins for dead people who were poor or have no relatives to support their funeral.

Moreover, this ritual gives people the experience of being in the coffins and they might realise the fact of life. The fact that one day they will end up laying down there with nothing they can take with them. Therefore, they can live their lives with more consciousness.

This is one of my most favorite purification rituals among all. I did it without realising that it is another type of the rituals. Most of the temples set up an area where there is a group of cattle chilling and eating. The visitors are encouraged to buy ready-to-eat green grasses from the temple and feed them. It is also possible to just donate the money by dropping some amount to a donation box usually placed near the area.

People have a belief that saving the lives of cattle makes them become healthy, live a long life, and relieve all the sufferings in their mind.

There is a reason behind this belief. Buddhist people believe in reincarnation. In each life, you can be reborn as different creatures, depending on how you live in the former life.

They believe cattle is the closest creature to human beings. That means, after this life as cattle, they may become human in their next lives. Moreover, cattle is a big animal and belongs to mammals classification of animals just like human beings.

By purchasing food for them at the temples, people automatically put money into the temples. The temples can have enough money to provide a proper care for the cattle. In some temples, the money does not go to just taking care of the cattle in the temples. They may spend money in other areas like fixing temples, supporting local schools, hospitals, etc., and many more.

The purification ritual is not from the teaching of the Buddha. On the contrary, the core value of Buddhism is to live in the present and rely on one’s self. Humans deserve any kind of consequences from our own actions. We cannot erase what we did and purify ourselves. Nothing can make our lives better but us.

Today, religion’s body has developed to be another type of business. So, one way that they can maintain and expand their organisations is to sell something and earn money which in Thai language we call phútthá-phaanít (literally means, buddhist commerce). The target customers are probably the believers.

In my opinion, there is nothing wrong with the buddhist commerce and the purification rituals as long as it helps generate good things in people lives, and as long as it does not spoof or hurt anyone.